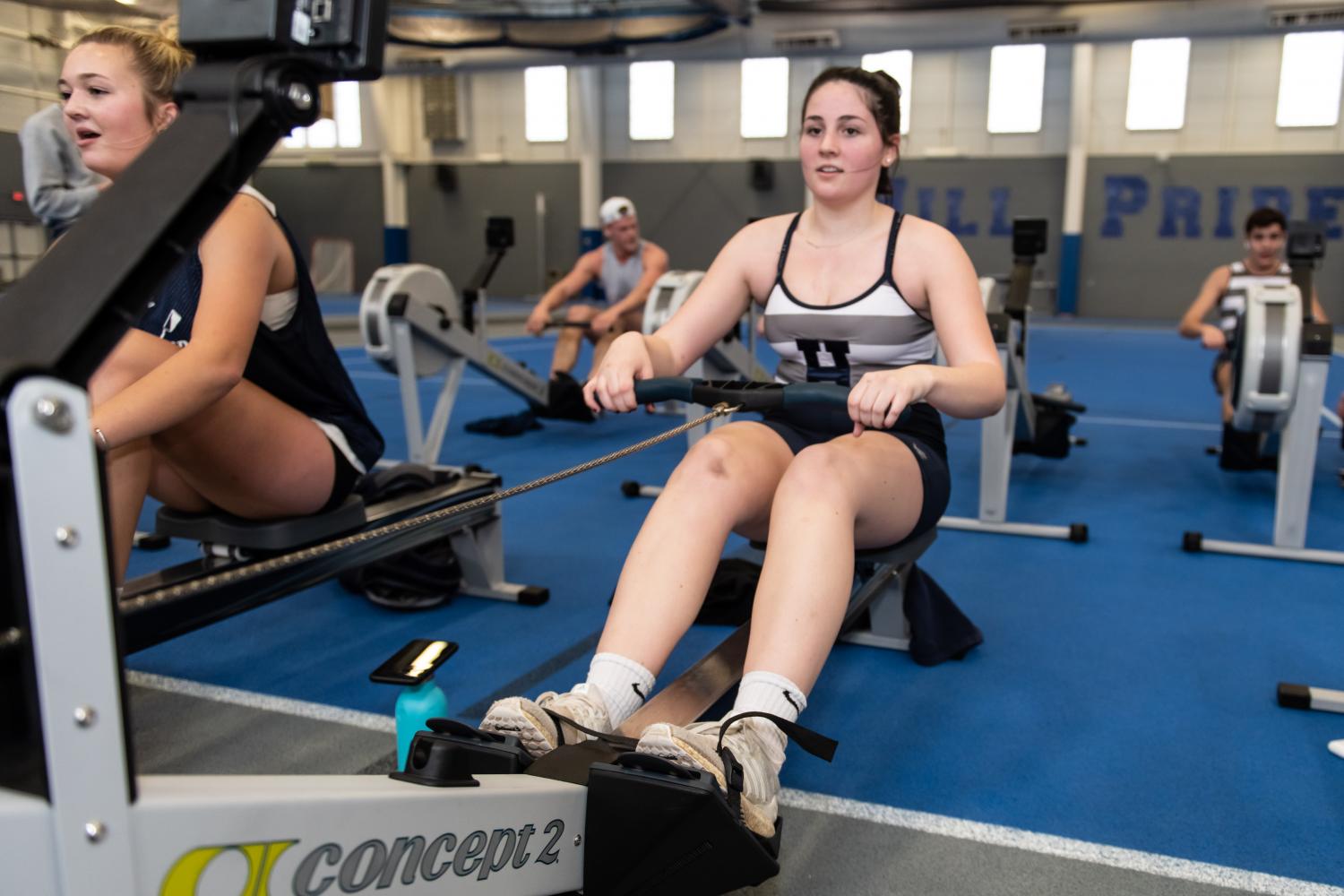 A Home for The Hill School Boat Club

Although the 2020 racing season came to an abrupt end, The Hill School Boat Club is continuing to look forward. It is no secret that the program has grown vastly over the past few years. The team has more members and energy than ever; the coaching staff has expanded greatly, and even this year generous donors added three new shells to the fleet.  However, there is still something missing that  could transfer into significant boat speed and the best possible experience for each rower: a designated space for the team to train and call home.

Over the past few years, the team has used a multipurpose room which has recently become the Dance Studio for winter and land training. It was a nice space to be in and work with but it always felt temporary to the team. From frequently moving the ergometers out of the Dance Studio to Sweeney Gym, it became clear that the growing team needed a space to call its own. With the approval of the school and the athletic department, very early plans to build such a space have been explored over the past couple of months.

“I am really excited by the thought of having a dedicated space for our athletes,” Head Boys Crew Coach Will Scully said. “We have spent years in temporary spaces and closets, forcing us to move around a lot. It is important to get a sense of permanence for our growing program. This building will reflect our seriousness and competitive intensity.”

The school owns property on the west side of the Eccleston Hockey Rink and is planning to situate the building there. This facility will feature an indoor rowing tank, a room dedicated for ergometer training, boys and girls locker rooms, and a multipurpose room dedicated to weightlifting, bodyweight exercise, stretching, yoga, and video review. The indoor tank will allow for eight rowers at a time to have on-water experience, both sweeping and sculling, throughout the winter. This is especially beneficial because coaches will get to have a more hands-on approach when teaching proper techniques. Varsity rowers can get steady-state water work in, and novices can learn how to row before the start of the racing season. The proposed ergometer room will be large enough to fit 32 ergs that can also be figured into four eights on slides. This will help the program advance as its goals to participate in eights unfold. The facility will not only make practices more efficient and give the team a home but also draw attention to the program in terms of recruiting.

“As our crew program has grown, it is clear that our rowers would benefit from a dedicated space to train when not in the water,” Hill Athletic Director Seth Eilberg said. “Hill has acquired land behind our hockey rink that we think could be the right amount of space for an on-campus crew training facility. Grateful for the necessary support to study the project, we have now begun to explore what is possible in this space. We will continue to work hard to ensure that all of our programs enjoy the very best possible facilities; and will address all opportunities to improve, as they arise.”

As circumstances and community interest permit, there is hope that the space will also be used for programming with the wider Pottstown community. It could serve as an introduction to rowing but also to promote community health and wellness. This is particularly true as the proposed building will be situated adjacent to Hobart’s Run.

The project still needs to be fully planned and funded, and then it will take up to 18 months to become ready for move-in. Director of Rowing and Head Girls Crew Coach Stephen Ciraolo has been working very hard the past couple of years to ensure that the program would become fast, competitive, and victorious.

In tribute to the sixth formers who have been a crucial part of the team’s development, Ciraolo said that “Great people plant trees whose shade they’ll never sit under.

“The entire arc of Hill crew makes clear that we can contemplate this project only because the enthusiasm, sweat, and total dedication of past and present rowers, their parents, alumni make it so,” Ciraolo said. “Like all great structures, the envisioned HSBC on-campus center would be the physical symbol of a much larger spirit that the rowers of ’21, ’20, and their predecessors have created.”

It is clear that this new addition would not be possible without the increased energy and work ethic of the program over the years, and the Hill School Boat Club hopes that this new facility will help to carry on this trend.