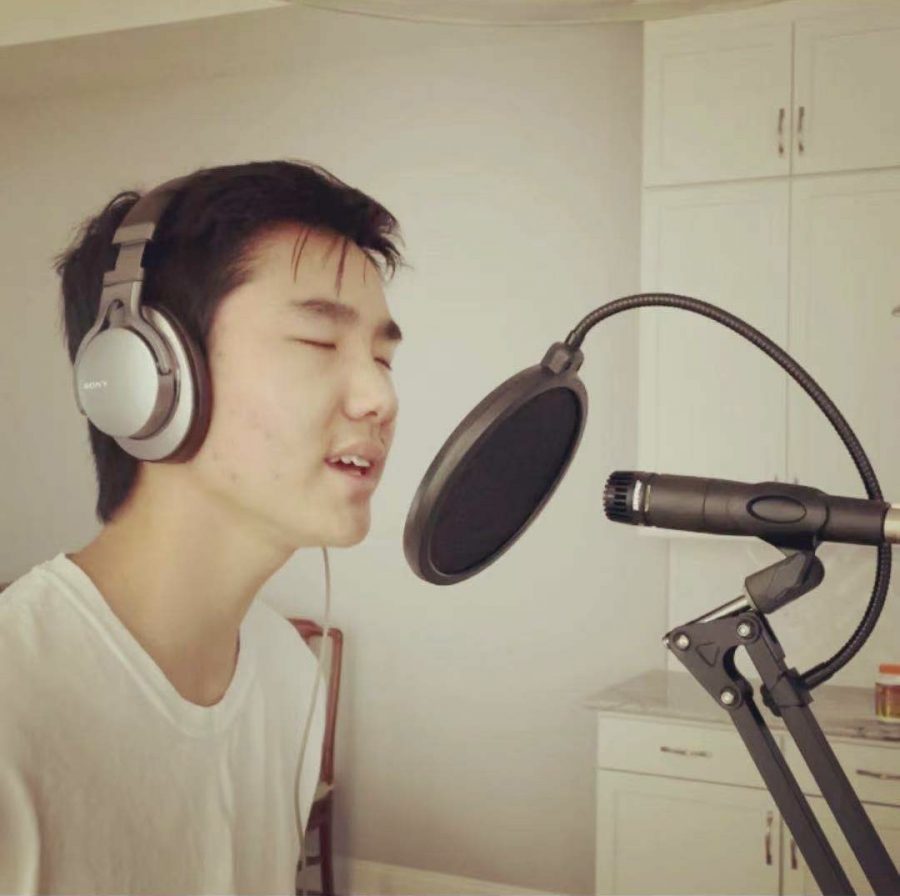 Johnny Dai ’22 is working toward producing an album.

Sixth former Johnny Dai has had a busy summer writing and recording music from his home. An accomplished cellist, pianist, guitarist, and vocalist, he, in conjunction with Hill students Tina Wang ’22 and Isabella Moranheras ’22, is working towards releasing both a full album of seven songs, currently untitled, as well as a single, tentatively named “The Words We Say.” In an interview, Dai outlined both his inspiration and process for this musical endeavor. An excerpt of our conversation is included below.

Callie Connelly: So far, what have you written and recorded?

Johnny Dai: This summer I decided to work on an album and a single. For the album I decided to work with various people, including some from the Hill School. There are seven songs/pieces; the album is going to consist of four songs and three instrumentals. I collaborated with Isabella [Moranheras ’22] and Tina Wang ’22 on a few of them.

CC: What’s the name of the single?

CC: And does the album have a name?

JD: There are a few names floating around right now.

CC: What made you want to create this? What was your motivation or inspiration?

JD: At the start of the summer, I actually wasn’t sure what I wanted to do musically because this summer I wanted to feel like I got something done. I’d been working on various projects – college applications, that kind of thing — but I decided I needed something a little more creative. I wanted to work on some music things, and I didn’t have too much to work with, in terms of resources, but I decided to make do with what I had. I realized I had a few songs lying around here and there that I wrote through the past three years, and I decided to choose the ones that would be most thematic with each other. I decided to try to make the most out of it, I guess.

CC: I know you play the cello and sing, but what is the music that you are actually recording for this? What do these pieces consist of?

JD: So I’m doing a combination of a few things — two of the pieces are going to be cello solos with piano accompaniment. Each of the songs/pieces are linked by a common theme, but they use various musical mediums. So, for example, one of them has piano as well as guitar as well as vocals; another one just has piano and vocals; another is just piano. There’s piano and cello, piano, cello, and vocal. The idea is that I don’t have the luxury of having all these different instruments, so I decided to just work with what I can.

CC: You mentioned that you collaborated with a couple people. Who are they and what role did they play in this?

JD: So, I was able to get some other people involved — two of them are vocalists; for example, the single is actually a duet. Another song — I wrote the lyrics but someone else is singing. Another person, Tina Wang ’22, is going to help me with the piano parts, particularly, and on top of that she is also helping me with the cover art of the album.

CC: What was your process for this? Did you have a recording space? What did you use to put the songs together? How does that all work?

JD: I use GarageBand because I’m too lazy to get a real program. Well, it’s not out of laziness; I’ve just been working with GarageBand for a while — it’s a little inefficient, but it’s fine. In terms of a recording space, I’m just using my house. One day I decided to go around the house, testing different rooms for various acoustic measurements, and I found that my kitchen, actually, was the best one to work with. So typically I would write the songs in bed with my guitar, and then figure out the mediums, like which instruments to use, and then I would go to the kitchen to record. Then I’d edit.

JD: I’ve spent mostly the past month working on it, and it has been a very interesting experience. I think the important thing is that you kinda just have to keep trying new things, continue experimenting, until eventually you get somewhere.

Hill School Director of Instrumental Music Margaret Neiswender said this about one of Dai’s demos: “I know Johnny mainly as a cellist – a talented cellist – but his musical aptitude is evident. It’s not often you see a student who is able to transition so seamlessly between instruments.” While Dai’s creative pursuits this summer haven’t been released yet, they will soon be available on Spotify, iTunes, and YouTube Music, under the name Johnny Day. Have a listen and check out his kitchen acoustics for yourself.