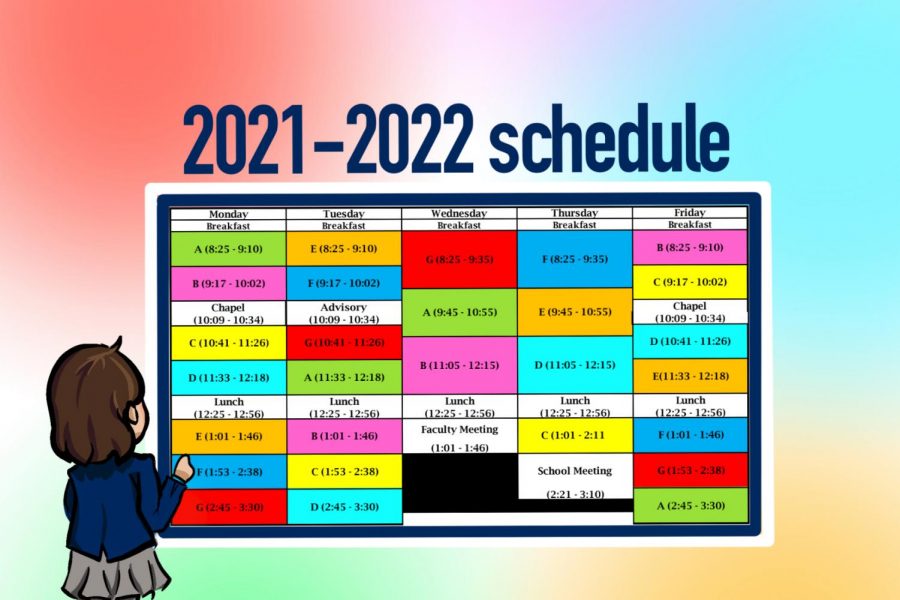 With the onslaught of the COVID-19 pandemic, many schools, including Hill, had to drastically change their normal routines in order to adjust to the demands of social distancing, mask wearing, and other CDC requirements. This period of uncertainty caused numerous changes to Hill’s usual school year, so much so that many students who are accustomed to the makeshift block-style schedule have no clue what a “regular” day at Hill looks like. Fortunately enough, starting this September, Hill will return to smooth sailing, starting with the reintroduction of a more familiar course schedule.

After considering the successes and failures of our last year’s schedule, the Academic Office has unanimously agreed to return to the seven 45-minute-long classes on Mondays, Tuesdays, and Fridays; as well as three 80-minute classes on Wednesdays and Thursdays.

“We’re doing a modified schedule for the first two weeks of the term; but, as far as the school year goes, we’re really following the previous schedule,” Director of Studies and Instruction Bo Kim said.

Indeed, the modified two-week schedule starting on Sept 6 will look quite different from the rest of the year. After Monday’s set of mini classes, schedules will consist of three or four 70-minute-long classes for two days of the week; the remaining days of the week will be seven 45-minute-long classes. All the while, there will be two different lunch and Chapel/advisory periods, similar to last year.

Some things might get moved depending on student arrivals and general safety; however, it’s safe to say Hill has returned to its former self.

Even before COVID-19, the idea of H-term floated around the Academic Office. The opportunity to try it for the first time arose last year since classes started earlier in August. “We thought that giving students the opportunity to explore other interests outside the formal academic realm would be amazing,” Baum said.

After receiving overwhelmingly positive feedback from both students and faculty, the Academic Office decided to keep a shortened H-term for the upcoming following school year – a welcome decision to the many students who enjoyed it.

“I had a lot of fun because my course was discussion-based more than lecture-based, and we were able to watch really interesting movies and videos that we could take and relate to our own lives, as people who are interested in STEM but haven’t stepped into the workforce itself,” Dami Odubona ’23 said, regarding her experience taking the Science, Race, and Social Justice class during last year’s H-Term.

This step back towards the previous schedule is not without debate. Just as many students were in favor of a return to the usual schedule, others were against it.

“The disruption in the flow of classes made getting used to complex material much harder,” Andres Arevalo ’22 said when asked about his experience with the COVID-19 long block schedule.

However, others hold a different opinion, preferring the comfort of prolonged classes with longer breaks. “The days went by faster, which significantly helped with motivation; I also liked the longer lunches,” noted Zaara Sahgal ’23.

Though students’ opinions differ, the Hill administration seems confident in their change. For the many students and faculty who supported their decision, the return to the previous schedule signifies a return to normalcy, as Hill along with the rest of the world takes steps towards recovery. Any additional information regarding the new academic schedule, as well as campus events, can be found on the Hill Calendar on thehill.org.