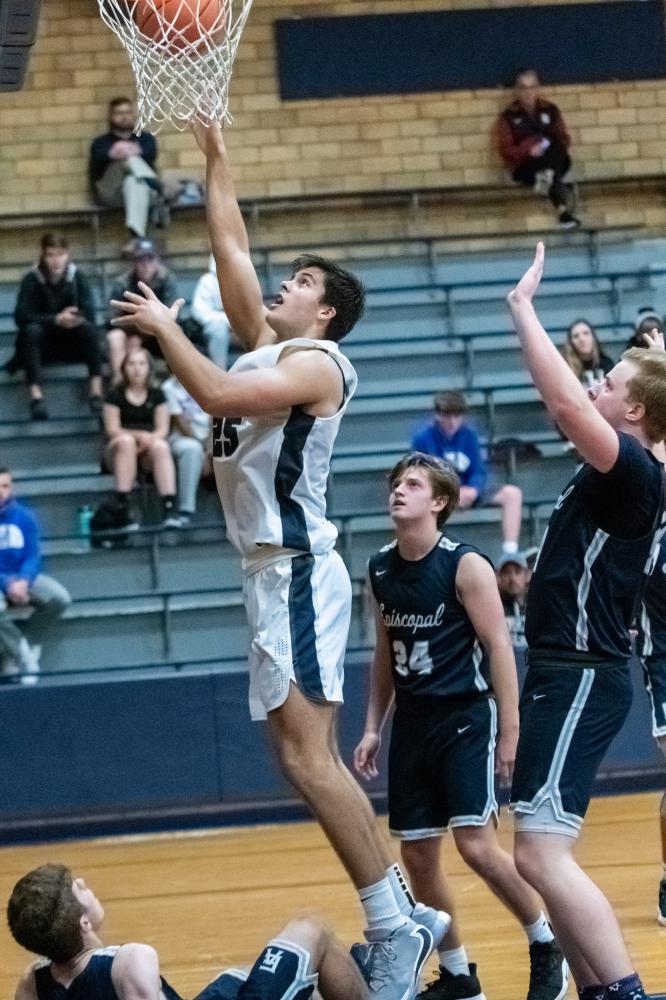 This year’s Hill Girls Hockey Team is ready for a successful season. “We play tough competition but at the same time, I think we’re a pretty strong team this year,” said Assistant Coach Laura McConney who has been working with the team for the past several years. With a much older group this year, the team and coaches are excited for a successful season with several strong team leaders. “Most of our sixth form are pretty strong, we have a few kids who are going to play division one and a few kids who are going to play high-level division three,” added McConney.

Head Coach Chris Bala noted Hill Boys Hockey’s goal this year is to continue working to develop their skills every day. “In the back of all of our minds is a league championship title, but I think the way we get there is by going to work every day and developing practice and consistency,” said Bala. “If we do that in our practice settings it will spill over into the games and that success will build on itself,” Bala said. The team is really coming together under strong leadership from the sixthth form and is hoping the team can go far this year.

Several talented athletes return to the court for this year’s girls squash season. “It will be a battle for the top of the line up with Carolyn Tsiang ’20, Kieu Anh Hong ’21, Shannon Quintana ’21, Tram Anh Tran ’20, and Elena Zhang ’20 all fighting for the number one position,” said Head Coach Chanel Erasmus. She also added that new players Feir Zhou ’23 and Summer Jin ’23 will impact the middle of the lineup. Erasmus said she looks forward to seeing the team rise up for a mentally and physically demanding season.

This year’s Hill Boys Squash Team is in full preparation for a successful 2019 season. With some of the team’s most competitive matches happening this January, Head Coach Chanel Erasmus hopes some players can continue into division two of the national championships. “We have a very young boys team with a lot of potentials: Andres Arevalo ’22 and Ross Falcon ’22 will play towards the top of the boys line up,” said Erasmus. “Keep an eye on Juan Ber Hinostroza ’21 and Tytus Felbor ’21 at the top of the lineup.”

This season for Hill Girls Swimming and Diving brings a lot of experienced team members back to the pool. On the diving side Olivia Devol ’21 and Kennedy Becker ’20 are bringing the competition. “Olivia Devol and Kennedy Becker are 5th and 6th form girl divers and they should be at the top of the competition for our meets,” said Head Swim Coach Amy Agnew. “Our 3 seniors, Maddie Green ’20, Maddy Lewis ’20, Alex Zelinske ’20, should all make a huge impact at each meet and Keirsten Dagg ’22 is a good distance swimmer for us,” added Agnew. As for team goals, Agnew hopes that the team can send as many competitors to The Easterns Championship meet at the end of the season.

The Boys Swimming and Diving team are preparing for a successful season with some strong returning and new athletes. “Michael Wong ’21 will be a big impact swimmer,” said Head Coach Amy Agnew. “Also Robert Twombly ’20 and Matt Kenvin ’20, they’re our captains for the boys’ team.” This season, Nathan Duchez ’20 joins as a swimmer and diver. “Our team has a great mix of new and returning athletes who are poised for a strong season,” said Head Diving Coach Jennifer Kokoska.

With the start of Hill Girls Basketball’s season, the team has encountered many travails. “Right now we have a lot of injuries so trying to get our team healthy,” said Coach Dienna Mayza. Despite these injuries, the team is continuing to work hard each day in practice to improve skills. “We want to win championships: MAPL and PAISSA, that’s always a goal of ours, but also working to get better every day,” said Mayza.

The Hill Boys Basketball Team is preparing for a competitive season welcoming some new players to the team. “We have lots of different guys who can score and impact the game in different ways,” said Head Coach Seth Eilberg. “Our goals are always the same every year which is to come and compete as hard as we can each day and get better and have fun doing it,” added Eliberg “We’re getting better each day which is always our goal”

“We lost three of the more talented guys we have had in the past decade, but we have somehow seemed to have risen to the occasion to fill those holes in quickly”

“We have some new guys that have a lot of promise”

Returning with a strong team, Hill Girls Track is looking to have a strong season.  “We look great, our numbers are looking really good we are distributed really well among the different events,” said Head Coach Patrick Lake. With the return of several talented athletes and the addition of some new runners, the team is looking to win some titles towards the end of the season. “With both teams, you may say that we are a favorite for winning the indoor PAISSA Championship, and the girls certainly have a very realistic and strong shot for a MAPL title as well,” said Lake.

Coming off of a successful 2018-2019 season, Hill Boys Track is looking to continue to win league and state titles, as well as growing individual athletes. “We lost three of the more talented guys we have had in the past decade, but we have somehow seemed to have risen to the occasion to fill those holes in quickly,” said Head Coach McMains.