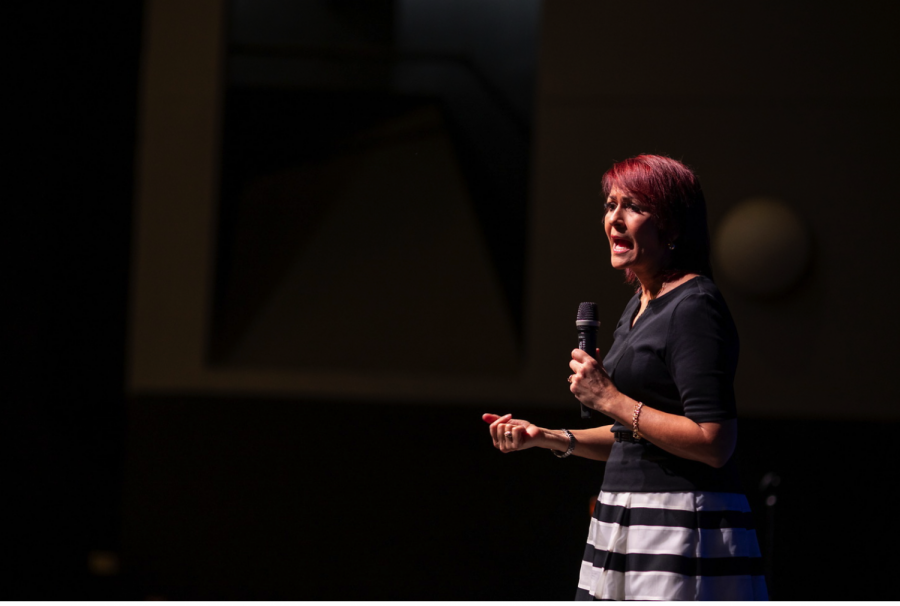 Shayla Rivera speaking to the Hill community on the CFTA stage. Photo sourced by HILL SNAPSHOTS

On Tuesday night, students and faculty gathered in the CFTA for the first Tom Ruth Speaker of the academic year. Hill welcomed Shayla Rivera, an aerospace engineer, motivational speaker, comedian, professor, and former NASA rocket scientist, as she came to address the community.

Rivera began her talk by telling students about the importance of each person’s story. She stated that while she would be speaking about her own life, she wanted to speak in a way that would allow others to resonate with her experiences.

As Rivera walked the Hill community through the story of her life, it became clear that she was not the kind of person that shies away from change. Students learned of how Rivera moved to Texas from Puerto Rico not knowing any English, and shortly after graduating from college in Texas, became a part of NASA’s Space Shuttle and Space Station program. From there, Rivera spoke about how she moved on to a career in technical sales, and later on to one in motivational speaking and comedy.

She left students with advice about limiting themselves to both their own expectations and the expectations of others. Rivera encouraged students not to place themselves into “jars,” constricted by set ideas on how things should be. Instead, she urged them to embrace uncertainty and to be unafraid to go after the things that they want to accomplish.

While Rivera’s story was full of bold experiences and exciting change, it was also not without its share of adversity. Rivera explained the hardship that she had to overcome when faced with the death of her son, detailing the grief that she felt before being able to laugh again. She also told the community about her past breast cancer diagnosis, garnering emphatic applause when she shared that she was now officially in remission.

In light of the obstacles, pain, and loss that Rivera had faced throughout her life, she left students and faculty with another important insight.